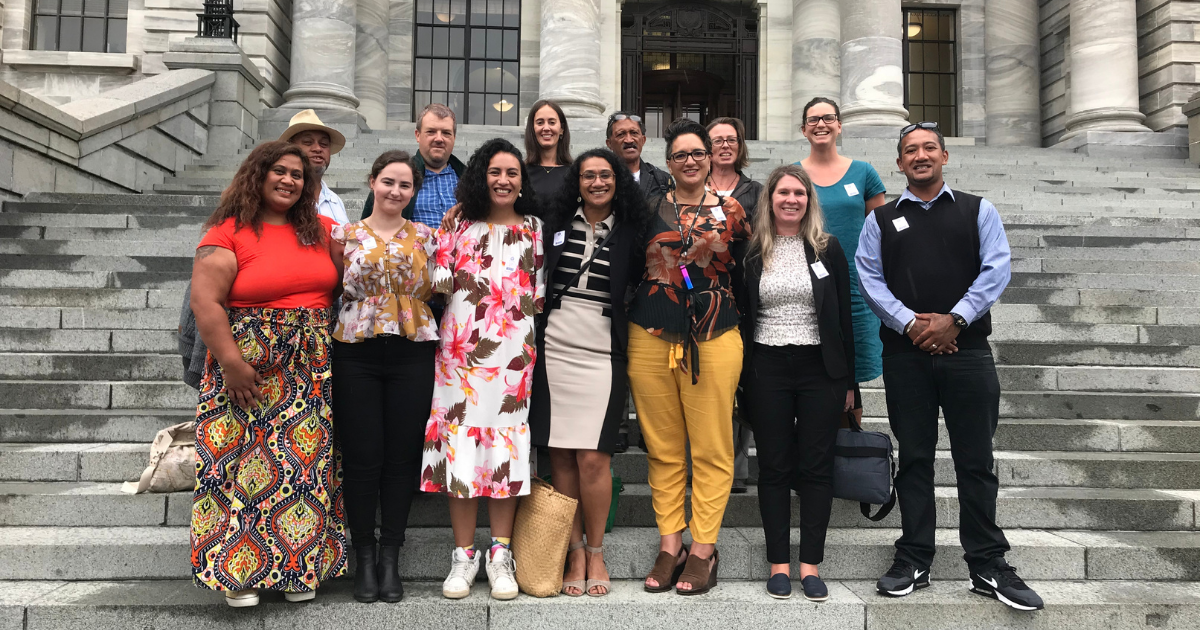 In 2021, our Economic Fairness Campaigners Ruby Powell and Max Harris worked alongside our friends and allies at Auckland Action Against Poverty, Child Poverty Action Group, Disabled Persons Assembly and many others, on the Fairer Future campaign to ensure every person has a liveable income.

We collaboratively designed and delivered both ‘insider’ and ‘outsider’ strategies.

For the insider track, we focussed on influencing the PM, Minister for Finance, and Minister for Social Development. One way we did this was through taking a rōpū of representatives of organisations and people with lived experience of the welfare system to meet their advisors in Wellington. In the hour we had with the advisors, we prioritised giving space to the people living and working on the frontline of these issues to speak.

We also used strategic media placements to try to influence the identified key decision-makers. For example, getting news articles and opinion pieces in the Dominion Post which is delivered to MPs every day, and pitching an opinion piece by Girol Karacaoglu (ex-Head Economist at The Treasury) to Interest.co.nz where the Minister for Finance and his advisors were likely to see it.

For the outsider track, we focused on making our allies as visible as possible, and showing the diverse range of people who support increasing benefit rates.

The key ways we did this were:

In a significant win for people power, in Budget 2021, the Government announced a $3.3 billion investment to increase income support levels.

Without the actions, commitment, and support of ActionStation campaigners, members, and our allies, the increase to benefits would not have happened. The Prime Minister, Minister for Finance, and Minister for Social Development all acknowledge the work of civil society groups in pushing them to make this change.

While these increases alone won’t achieve liveable incomes for all and solve our poverty crisis, it showed that what we’re doing is working.

Polling by UMR immediately after Budget 2021 showed that 60% of people in New Zealand supported further raises to income support levels. With strengthened determination and more groups joining us, our Economic Fairness campaigners continue to coordinate the Fairer Future group into 2022.

The last thing the group did in 2021 was produce this video which is a message of solidarity to families who have been locked in poverty by low wages and inadequate benefit rates.

ActionStation relies on small donations from people like yourself, the members of the ActionStation community.

Will you chip in to support people-powered campaigns for a fairer future for people locked in poverty?